skip to main | skip to sidebar

The Grievance Industry Wants Your $$

If I can convince you someone deserves help, I can make a fortune

You may have seen, earlier in this blog, the tremendous hoax behind the term, "African - American". That's not the only case in which people are exploited for monetary gain.

At the sci-fi/fantasy convention, "Dragoncon", it was apparently necessary to single out some demographics for special attention. These groups cannot advance on their own merit, it seems, and so special attention is necessary based on... identity. Not achievement.

So an organized effort must be mounted to see that everyone gets market share.

The Dragoncon venue/universe encompasses every kind of performing art - emphasis on, "performing". In general, the audience absolutely cannot tell if the artist is LBGTQ or of a given race, and in fact this is totally irrelevant to them. Elton John and James Brown showed more than 50 years ago that people ignore such things when a killer product is delivered. This has been lost on the professionally offended today.

There are also a couple of political fora designed to blame others for the failure of a particular group, or to get special attention.

When have any of us cared who the performer is until after we have seen their work?

To the point, there is serious money to be made in the grievance industry - that industry concerned with the outrage of... third parties. As we have seen the real achievements of minorities obliterated because they succeeded the "wrong" way, we see yet more Reasoning Deficit Disorder.
Such people who insist that the way to success is to penalize the already successful are deranged, and we should not oblige them. Especially heinous is the effect chivvying for advantage has on the market: standards are lowered. This is not the way to get excellence. The mediocre are not magically made great by calling on their personality.

Be careful. The issue is not that such people exist. It is that there is value being assigned to identity independent of contribution to society. Two excellent articles illustrating this are Six Harsh Truths That Will Make You a Better Person, and Fisking NPD About Latinos In The Movies. I note in the latter that LGBTQ+ is represented on-air at nearly ten times their representation in the population.

In short: you want success, my attention? Put out. Even Hollywood, the most savage competitive environment there is, asks for that as it pretends to care.

If You Do Not See The Term, “Kilowatt-Hours”, You’re Wasting Your Time

It is a big deal to some that government is pushing the electrification of surface transportation in the US. This concern is proper, for government has botched many public measures, and “gasohol” is a major failure, wasting energy and foodstuffs in a variety of ways not discussed here, but easily discovered by the witful.

Electric transportation is NOT one of those mistakes. Let us see why: 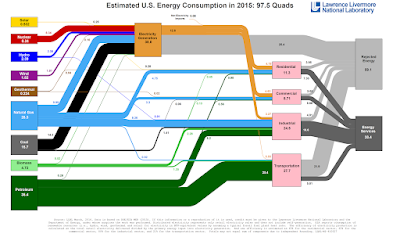 Waste heat, called “rejected energy” by engineers, is highest by percentage in transportation services. Look at the ratio of black to gray on the right of the pink “Transportation” block. Not only does your car or truck idle in traffic, and run at other than its most efficient speed most of the time, it blows ~3 times the energy used to propel you out the tailpipe and another bunch of heat through the radiator, doing nothing at all but heating your vicinity and expelling poisonous gases.
This is the biggest reason electric motors appeal to people who simply don’t want to pay for waste.

So, here are some advantages of electrifying cars, trucks and buses:

As it is, personal transportation in the USA is a tremendous mishmash of compromises, largely made with convenience as the major factor. This lack of logic is easy to illustrate: you may go buy a 200HP motorcycle, capable of over 100MPH in first gear, for street use, but you can't take a Kawasaki Mule to the store. The DOT is supposed to enforce standards w/r/t vehicle lighting, but any look at traffic reveals this to be a boondoggle, a waste of taxpayer money, as nothing is standardized and lots of vehicle lighting is ineffective.

When you think you have a right to energy, you’ve made a mistake. Figuring out how to do things better is really better for your bank account as well as the environment, and the likelihood that early measures will not be optimum is not a reason to abandon all progress.

Go buy a buggy whip and think about the horse.

Hell, no, you’re not making sense

There is an affliction evident in the general population roughly coincident to the diagnoses of Asperger’s Syndrome or autism: Reasoning Deficit Disorder.

It is clear that large numbers of people express opinions stridently, sometimes even justifying their use of actual violence, based on completely contradictory points of view, a lack of information, or outright lies. They block, ban, unfriend one another for even imaginary slights, each offense more trivial than the last.

The lack of information is the easiest to comprehend, but very hard to fight once a person has adopted an emotional bond to their idea, however baseless. Only the harshest circumstance of reality can cause them to abandon their oh-so-pleasing fantasy, and then childish tantrums and chaos result. This is to be expected, because Reality is often harsh, and the number of people allowed to age without education and responsibility is rising.

So, I first offer a series of statements to fill some gaps. You can look things up yourself to confirm them; I hope that is your habit, and that you seek sources of information, not editorials. If you are offended, then you have an emotional stake in the issue. That interferes with reason. So:

Examples of The Exercise of Poor Reasoning

The American Hoax is Called "Freedom"

Your freedom is being stolen from you, and you are not as free as you think. Pay attention.
You have never thought about the Third Amendment to the Constitution, and so this is happening right under your nose. There isn’t any way to overstate this. Here’s how and why.

But you don’t care about the Third. Why not? Here’s what it says:
"No Soldier shall, in time of peace be quartered in any house, without the consent of the Owner, nor in time of war, but in a manner to be prescribed by law."

What was it meant to do?

The Third Amendment is intended to protect citizens' rights to the ownership and use of their property without intrusion by the government.

Well, then, where’s the problem? Nobody in the Army wants to live in my house!

It’s that “intrusion by the government”.
See, governments of any size DO have a vested interest in the existence and conduct of its citizens – this is why we have a Census, among other things – but there’s more.

Your information is constantly extracted from everything you do.

Take a look at this. Can you name who might have organized things such that the identical script was followed by dozens of television stations? Oh, sorry – did you actually trust that smiling face on your TV before I showed you that?
Are you trying to claim that your station, your favorite doesn’t say what others write for her?
Please stop. You're being stupid.

Okay. It gets worse:

Have you thought about what happens if you don’t pay your taxes? In case you don’t want to say it, I will: if you don’t pay your taxes, the Sheriff of your county will come and forcibly remove you from your property. Your possessions, no matter how many or few, are yours – move them or lose them.
Well, what if you pay your taxes?
Check this case, Kelo v New London. The local government was induced to condemn the homes of local citizens who were completely up to date on their taxes AND who had no criminal record. Those people went to court and failed to keep their homes, as the ruling was that the city of New London acted properly in using eminent domain to force the transfer of private property to a development company. This company actually billed the people whose homes they would destroy for daring to live there during the time it took to go to court - and then the development company failed, leaving bare ground where homes once stood.

Yeah. Go all gooey listening to Lee Greenwood sing about how free you are. I can promise you that’s amusing to the tax man - and to others who have real power over you.

But hey – I’m not done. It gets better – and here’s where the 3rd, 4th and 5th Amendments all get trashed!
Look at the 4th Amendment:

The right of the people to be secure in their persons, houses, papers, and effects, against unreasonable searches and seizures, shall not be violated, and no Warrants shall issue, but upon probable cause, supported by Oath or affirmation, and particularly describing the place to be searched, and the persons or things to be seized.

Simple.
They won’t.
And - they aren't.
The Internal Revenue Service is now being directed to examine transactions of just $600 and above. Yes - six hundred dollars. Even as this number may be changed in political jiggery-pokery, modern data collection methods make it possible to determine your household's tendencies with respect to accepting public policy - up to and including obeying the law.
Target, for Christ's sake, was and is able to tell if you have a family member who has tested positive on a pregnancy test - not by snooping, but by watching your purchase patterns.
You really have no idea how your information is collected, DO you?
Don't worry about the laws which exist now - think about the laws you were sure would never appear. Look around to see things already here, like police in schools and papers to travel.
What is next?